To promote theoretical and computational neuroscience to the neuroscience community, I (Memming Park) have interviewed a number of neuroscientists with diverse background. Most of these interviews took place at COSYNE 2016 main meeting (Salt lake city, Utah).

The videos were promoted on twitter with hashtag: #theoryMatters 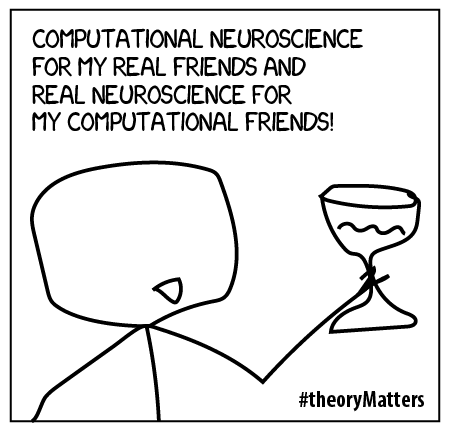 (I drew this one morning inspired by this xkcd strip.)

Anne newly joined the executive committee of COSYNE. This was the pilot interview that was sent out to recruit interviewees.

Alex Pouget at University of Geneva

Alex is one of the 3 founders of COSYNE meeting (he explains the history of COSYNE in the video).

Ben is an experimentalist (electrophysiology and imaging).

CEO of Brain Corp, and Editor-in-Chief of Scholarpedia.

Niru is a grad student at Stanford. Both a theorist and experimentalist.

Matthias Bethge at University of Tuebingen

Anne Churchland came up with the initial idea of making a promotional video, and I suggested interviewing COSYNE participants. CSHL has a related blog post. I designed, filmed, and edited all interviews. This project is partially sponsored by COSYNE.